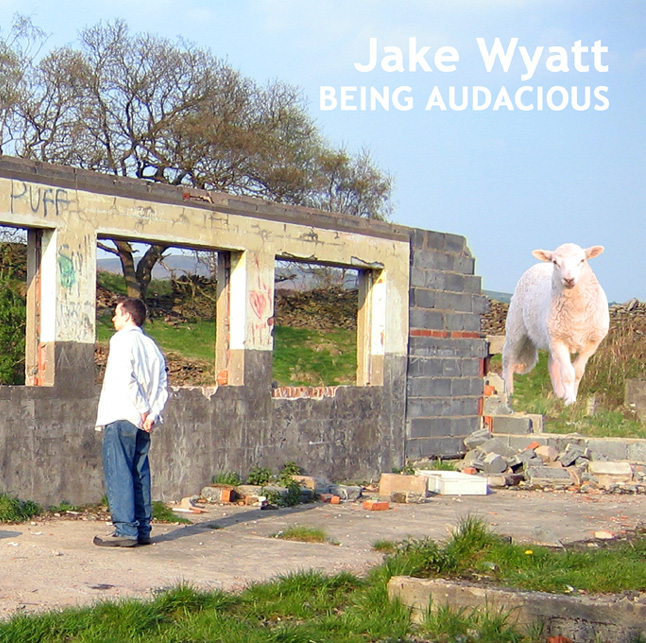 This is my debut spoken word comedy CD album – sketches, interviews and noise – compiled and released in 2005.

Large elements of these recordings were first heard broadcast on Fusion 106 at the University of Glamorgan and on GTFM Radio in South Wales, 2002-2005. 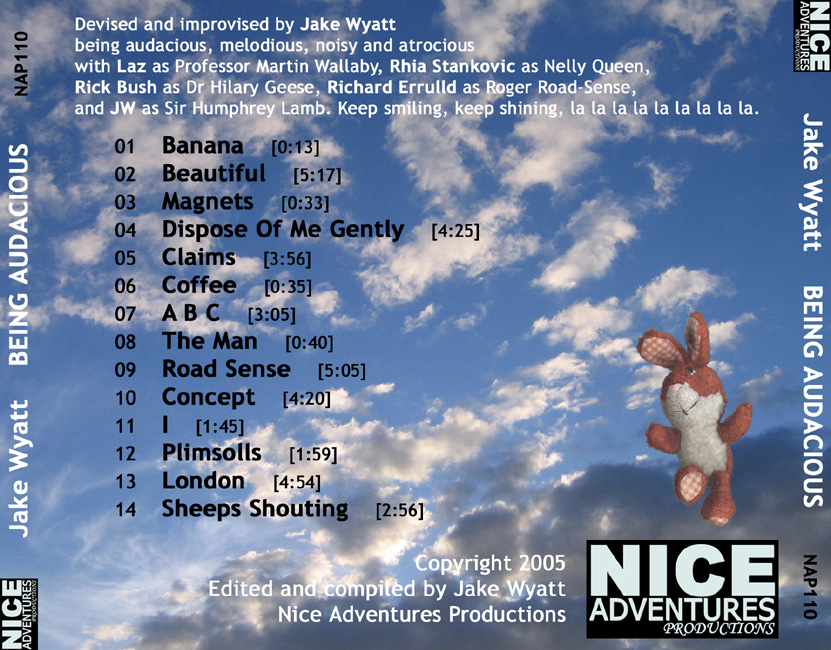 The back inlay features Alan the Bunny dancing on clouds, not illustrating anything on the album. If I ever get around to re-releasing this on CD, the rear will likely gain a fresh concept.

Inside the front sleeve, meanwhile, is this, which is clearly ace: 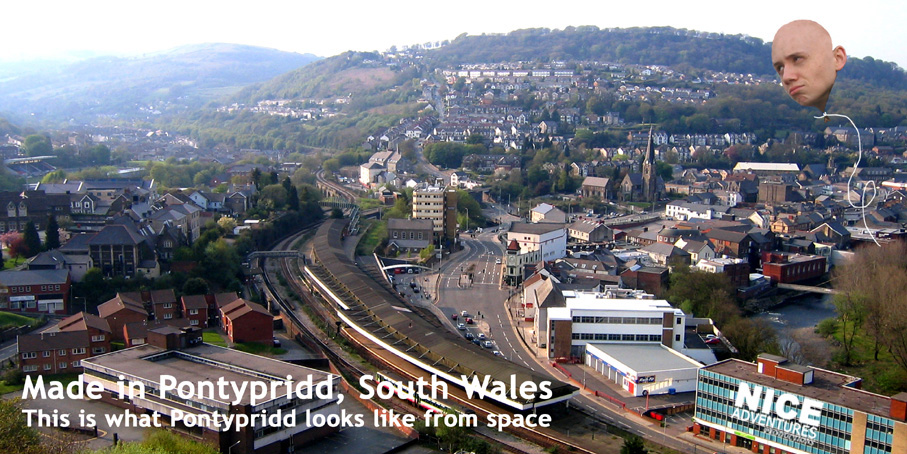 And this is the full front sleeve, opened out, with credit information and rude graffiti…

This image of me in some ruins was taken, on timer, during a walk on the hill overlooking Pontypridd from the south. I didn’t notice the giant sheep at the time – only later, when I superimposed her.

Anyway, you can listen to and download this album now on Bandcamp, where I re-released it in 2013.

This is a 2002 re-recording of a free-styled poem I set down on cassette tape circa 1990, which greatly amused me upon playback as the battery was drained and it played very slowly. There is also an extended version. I consider this track may lead to an autonomous sensory meridian response (ASMR) and would like to hear from anyone who has felt this.

My love for Banana continued.

First of three sections on this album extracted from my 2002 radio programme on the subject of Time; featuring Laz Assiratti as time traveller and thief, Professor Martin Wallaby.

In 2002, I dragged a couple of unknown students away from their studies to record a few pages of ridiculous statements, and later spliced them with some slowed down blowing noises which were part of my bed for the legendary Jar of Zamaroth competition, which involved guessing how many of an item (pennies, sweets, Amandas) were being shaken in a special jar. I now keep shiny coins in the Jar of Zamaroth.

“What do you think about Magnets? I bet you don’t love them as much as I do.”

(4) Dispose Of Me Gently

Part of my 2003 show exploring Music, and what Music is, and why Music is. Featuring Rhia Stankovic as session singer Nelly Queen.

“We’re going beyond the realms and we’re being audacious.”

Featuring James Ballard, Lloyd Harrington and Owen Evans as diners; recorded and sequenced by accident in 2004.

A 2002 interview with a stranger at the University of Glamorgan, for the purposes of purposes.

Featuring Richard Errulld as Roger Road-Sense, from my 2004 sound programme about Sense. It was my privilege to not know about driving at all but to meet in person a man who knew and would share what everything was about regarding the driving. In this interview, everything and more was touched upon.

Featuring Rick Bush as quantum theorist Dr Hilary Geese, experimenting with the Concept of Time in 2002.

For my show on student radio in 1999, I was interviewing people around Pontypridd Market so I could later drop their comments into a weird context. But one gentleman I spoke to, Dennis Walter Christopher, came out with such a dazzling response, wonderfully weird on its own terms, which I cherish and share unabridged.

Me: “Do you believe in the spirit world?”

Dennis: “I am the most important person around at the moment. My second name – my last name – is Christopher. Christ. Of Christ. Christos – Greek for the Messiah. My family… Ah, my family’s come all the way down from Christ. That’s where Christmas comes from – and Christianity comes from. My name… When Jesus was born… and his mother, his mother and father had one name, see? He was called Jesus and Mary. So when Jesus was born he was called Jesus Christ, see? And all Jesus’ disciples had one name, see? But Jesus had two names, see, for his name to go on. That was the first time of registering children, see? So Jesus’ name would have to go on. So my name comes all the way from Christ and Christianity, see? My name’s Dennis Walter Christopher. Christos was the Greek word for the Messiah, see? And the ‘opher’* put on the end for the word. So I am of Christ, see? Anointed.”

Me: “Do you believe in ghosts?”

Dennis: “No.” (And he disappeared into the crowd…)

* Not entirely sure, but I think that’s what he’s saying…

This vox pop is introduced on the track with a special announcement and keyboard bleeping – another thing of “music” from 2002.

A microphone and silly questions thrust at a person unknown at the University of Glamorgan in 2002.

It took me a while to decide whether I preferred the spelling plimsolls or plimsoles, both of which are viable.

A 2003 interview with myself as Frank Temple, the so-called Mighty Lord of London, with elements of 2001 recordings with Rick Bush threaded in, plus new background noises added in 2005.

A remix of recordings of sheep in Pontypridd, a bit of improvised keyboarding, and selected chunks of live and pre-recorded studio conversation with John Williams as Sir Humphrey Lamb in 2004.

Thank you to my featured friends and to the many nice voices, several of whom I only met that once upon a time we shared, and to station managers Mary Traynor and Steve Johnson for giving me all the airwaves I needed to breathe and find my voice.

All of this © Jake Wyatt / Nice Adventures Productions